Innovation seems to be a buzzword today in many companies. But is it really that easy to implement a culture of innovation?
A good example to show that innovation in a organisation isn’t that easy is dated in around 1898. Lt. Sim enhanced the naval guns and although this innovation lead to a better performance, the naval head office ignored it. More information about that history can be found here: http://denninginstitute.com/pjd/TT/Sims/Sims.pdf

So what might have been the reason that Lt. Sims didn’t have success in the first place?
– It was always done the old way and that worked
– Face saving – the naval office didn’t want to loose their face by admitting something
– Not having involved other persons – not having allies
– Problem of NIH: not invented here – so it cant be good
And there are a lot of other reason.

The surprising thing is that most of these reason are still the reasons used today that innovation doesn’t function in an organisation.

So what are the learning for today’s managers?
– Innovation often comes from the creative use of existing technology by a practitioner
– Innovation often emerges from groups that have a motivated manager who encourages experimentation
– As long as there is no gap between expectations and performance, a successful system will seek stability
– Resistance to change is often system wide because it runs counter to the culture
– Top management support is often necessary for successful change
– Stability and consistency are necessary for success–as is experimentation
Especially the last point is challenging. Stability and consistency are also needed for a successful business. But both are killer for innovations – so the right balance must be found.

Mostly well established companies have some innovative ideas but are unable to integrate them into a business model. Take Kodak as an example, it had several patent for digital photography but was unable to put it into a new business model. So for example one third of the firms in the Fortune 500in 1970 no longer existed in 1983. Just because most of them could capitalise their innovations. 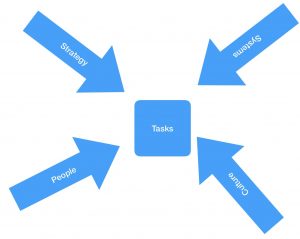 So if an organisation want to implement or capitalise an innovation, it has to adept their tasks. And this means, strategy, people, culture and system must fit to it. So the question is, if these four factors fit to it. The challenge is, that if everything fits or was made fitting, it just stay flexible. Otherwise, when the next change is coming, the organisation is one again frozen.

“We trained hard, but it seemed that every timewe were beginning to form into teams, we
would be re-organised. I was to learn later in
life that we tend to meet any new situation by
re-organising and a wonderful method it can befor creating the illusion of progress while
producing confusion, inefficiency and
demoralisation.
Roman General Gaius Petronius
CE 66